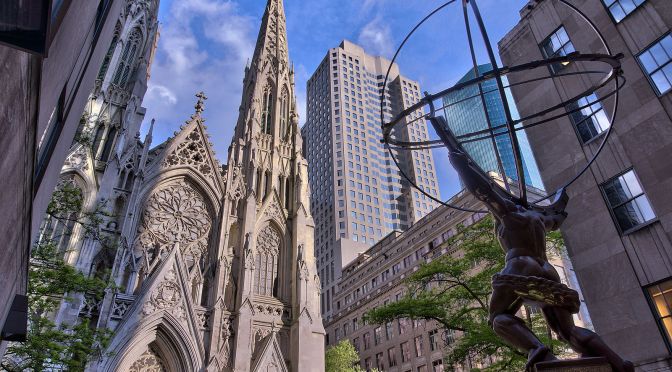 Two of the most striking buildings in New York City face each other on opposite sides of 5th Avenue: St. Patrick’s Cathedral and Rockefeller Center. The contrast between the two is iconic of the difference between “the City of God” (all that is ordered towards God) and “the city of man” (all that is ordered to man without reference to God).

Rockefeller Center is a massive monument to the achievements of man. It contrasts starkly with the Cathedral because it is imbued with secular humanism and its art is tinged with the theme of pride and defiance. The overriding emphasis is on man and what he can achieve on his own.

Two of Rockefeller Center’s most prominent works of art – Atlas and Prometheus – are both Greek mythological figures who represent defiance of and freedom from divine power. They were Titans who rebelled against the Olympian gods. Atlas led a war against the Olympians and was punished by being forced to hold up the heavens from the earth for all of time. Prometheus gave man access to the divine secret of fire, contrary to the will of the Olympians, and was punished by being chained to a rock and having his liver eaten for all time by massive eagles.

Rockefeller Center is certainly an impressive place, but its art celebrates something problematic. While it rightfully memorializes laudable achievements of man, it does so with a tone of defiance and hubris. What happens when man is celebrated without reference to God? The Tower of Babel happens: confusion and dissipation. When the proper of hierarchy of being is overturned, peace and order can never be fully achieved.

St. Patrick’s Cathedral offers the antidote for the disorder that is  embodied by the art of Rockefeller Center, and by much of New York City for that matter. Throughout the city, we find proud testaments to the achievements of man, and the enticement of promises of what we ourselves can achieve. We are bombarded by noise, confusion, and distractions, but inside this Cathedral, this place of God, we experience harmony and peace – we experience silence in the city. Outside we experience the dysfunctional city of man; in here we experience the ordered and harmonious City of God.

Outside these doors, the city of man celebrates the emancipation of the ego and idolizes personal freedom. However, inside these doors, the City of God, all things are celebrated in their relationship to God. Contrary to contemporary thought, the ego can only find true fulfillment when it looses itself in God. By allowing itself to be dependent on God, for Whom he was made, the person finds true freedom as  all of his energies and capacities are directed toward their natural end.

The effect of this Neo-Gothic cathedral is to de-center the ego of the person by causing him to reflect upon a cosmos that is greater than himself. Everywhere we look, we see celebrations of the beauty of creation: everything from plants, to humans, to angels. This cathedral thus encourages what Bishop Barron calls a “cosmic consciousness” – an awareness of the whole of creation and our relatively small place in it.

This de-centering of the ego may be disconcerting at first, but it ultimately leads us to peace and tranquility. We slowly begin to realize, contrary to the message that is blared at us outside, that if we trust in God and depend on Him, we will find true happiness. We do not need to grasp and shove and run the daily rat race. All we need to do is center ourselves on God, order ourselves around Him, and everything else will find its place. As Our Lord tells us: “Come to me all you who are weary and heavy-burdened and I will give you rest.”

We cannot escape the fact that we live in a city of man full of noise and disorder, but we should take heart in knowing that within this great city of man, the City of God is present and growing. It is present here in this Cathedral and in every church where the Eucharist is present.

I would like to close with this passage from Chapter 21 of the Book of Revelation:

Then I saw a new heaven and a new earth…I also saw the holy city, a new Jerusalem, coming down out of heaven from God as a bride adorned for her husband. I heard a loud voice from the throne saying, “Behold, God’s dwelling is with the human race. He will dwell with them and they will be his people and God himself will always be with them [as their God]. He will wipe every tear from their eyes, and there shall be no more death or mourning, wailing or pain, for the old order has passed away.”

The one who sat on the throne said, “Behold, I make all things new.”

When the city of man becomes too much for you, make your way here and allow yourself to find silence and peace in God. In this beautiful building, we experience an architectural foreshadowing of the City of God, the New Jerusalem, that awaits us in Heaven.

Come here, remember that you are a citizen of the City of God, and then bravely go back out into the city of man, knowing that wherever you go, you bring the City of God with you.

One thought on “Finding Peace in “the City of Man””