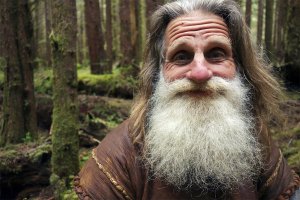 In the Hoh rain forest on the Olympic peninsula of Washington State, there lives a man by the name of Mick Dodge. This Washington native, whose great-grandparents settled the terrain he now inhabits, took off his shoes twenty-five years ago, left the modern world, and walked into the wilderness. When asked how he manages to live the way he does, he gives a characteristically quirky response:

“My family has perfected the art of dodging civilizations for hundreds of years. All I have to do is follow my feet.”

After watching a show about him on the National Geographic Channel, I found myself very intrigued by this forest dweller. I was fascinated by the lifestyle that he had embraced: he lives in a tree, doesn’t wear shoes, and brushes his teeth with a pine-cone. Talk about simplifying your life!

The episode I watched showed him looking for meat after going days without any protein. It was a lot of fun to watch how resourcefully he solved his problem, never losing his sense of humor nor his positive outlook despite failed fishing attempts and other setbacks. “Following his feet” (and tiding himself over with some squirmy grubs) he went to a roadside where he stashed some road kill and headed to the seashore. There, he used the dead meat as bait to catch some crabs, from which he made a hearty meal.

Learning about him, I was impressed as much by his austerity as I was by his personality.  One might think that someone with a lifestyle like his, cut off from civilization, would be somewhat of a curmudgeon – reclusive and suspicious. However, Mick is anything but that. His unbeatable optimism and idiosyncratic sense of humor make him seem like someone whom I would love to get to know.

Leaving Everything Behind for God

Mick’s hermetic lifestyle is nothing new. Although it may look like a 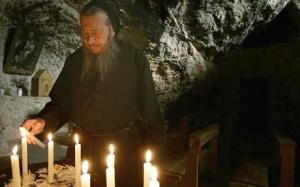 novelty, it really is nothing more than a secular version of an ancient religious tradition. For centuries, Christians have been voluntarily renouncing the world to live in the wilderness. St. Anthony the Great (c. 251 – 356 AD – also known as the Father of Monasticism) was one of the first to leave everything and go into the desert to seek greater closeness to God. His life and intense ascetic practices became legendary, inspiring St. Athanasius to write The Life of Saint Anthony the Great, which in turn inspired a religious movement that eventually developed into great Christian monastic orders such as the Benedictines, Augustinians, and Trappists, all of which continue to this day.

Why is it that over the course of thousands of years, people have so radically changed their lives to live as hermits and monks? What is it that moves men and women to give up the comforts of human civilization? Even today, in a world that offers the possibility of instantaneous satisfaction of almost every human desire, people still leave it all behind: why?

“My heart is restless, Lord, until it rests in Thee.” – St. Augustine

I think that it has something to do with human nature itself. We are such that we will never be fully satisfied by things: and this is something that makes us profoundly different from animals. My family back home has a pretty Welsh Corgi named Lucy. I have gotten to know her well and enjoy watching her antics. Lucy does not need much to be fully satisfied: with food, water, exercise, and a good belly rub, she is as happy as can be.

However, experience and history show us that it is not the same for humans: we are always striving for more, looking for something else. Material things are not enough to make us happy and satisfied: we seek and long for spiritual fulfillment. Every human heart has a deep longing, one that can only be satisfied by knowing that one is loved infinitely.

You are Made for God

Every person is capax Dei, “capable of God”: we were made for Him and have the capacity to know and love Him, even if we do not realize it.

This is why people leave the comforts of the modern world; and this is why more and more men and women are reacting against noisy and hyper-consumerist Western culture in search of a simpler and more meaningful life. That small voice that has driven men to seek the solitude of the wilderness for millennia still speaks deep down in the hearts of each one of us. 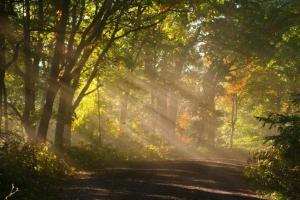 It is voice that spoke to Moses from the burning bush; it is the whisper that overwhelmed Elijah; it is the call that challenged the Apostles. It speaks to each one of us, asking us to leave the world to one degree or another. In a myriad of ways, each one as unique as the person to whom it is directed, the voice continues to say:

2 thoughts on “Made for More”